Skip to Content
Home / development / My first day at MICD before really something had happened!

Last Friday at MICD, We had an orientation meeting. We got an overview of syllabus and schedule of the classes to be held during the 2- year course. The targets that are to be made in developing skilled and knowledgeable required the human resource in Development sectors was being overviewed. The resource persons and teachers’ name was being listed out. The links and establishment of this course with University in Pavia, Italy had been mentioned. Motivating and interesting talks from Suresh sir, Dinesh Bhuju sir, 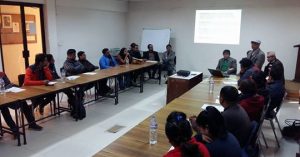 The meeting is ended with talks, teas, and cookies in titled as “Getting know each other.” The meeting was over with mentioning to meet in the classes starting from coming Sunday on 6:30 am.

It was about 5:00 pm when I left the MICD on one of the participants’ Bike’s back seat. He seemed to be a teacher teaching Accounts in Plus-2 schools. We rode with discussing the course we are taking part is being good and helps to develop skills and knowledge indeed. Later I come to know his name is Baral ji.

On Sunday, I was early to class at 6:15 am. I thought I have to take some teas. So, instead of entering the MICD, I looked outside for any shops opened. The one next to MICD was being closed. Maybe it was being too early morning. One of the woman was sweeping at the side of pavement of road. I asked her if any tea shop was there nearby. She replied giving me direction – Left hand side down the road. I followed the direction and found underground shop lighted. I asked the old man there if tea was available.

He said Yes. I was talkative with asking about the Bus of Mahanagar was being late if I have to reach there at that hours. He asked me with confidence if I had been there for MICD. I said Yes, How did you know? I responded and asked.  He told, students from there and even teacher comes there for tea. He named one of the teachers’ name as Wagle sir. I was then unaware  of the name he was mentioning. Then I kept Mum! I drank tea and looked for the watch. It was already 6:30 am. I hurriedly entered the MICD and staired up to the Hall where the participants was seating in U-shaped table almost full. I, myself lifted up a chair from the racked up chairs at the side and seated myself next to one of the lady where a little space was there,  and who was seating in the direction front to the projector. The teacher had not yet arrived then. It was the first day of my participation before really something had started.

Review of Amartya Sen: Freedom of choice -concept and content